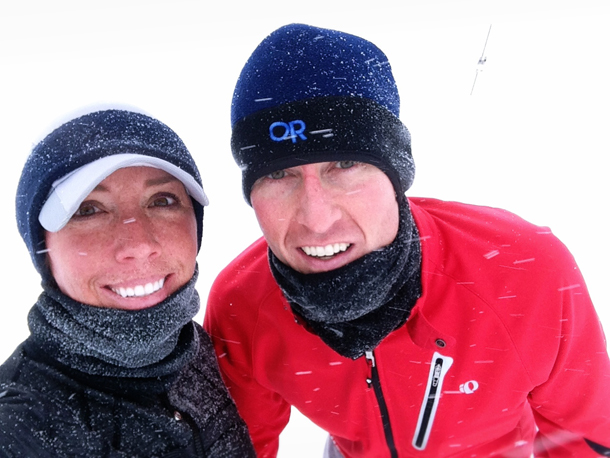 Four days into our trip and our pace has already slowed way down.  Our weekend was filled with family gatherings and dinners and a toddler who was completely off her usual schedule as we pushed her to a few nights of late bedtimes.  It's funny because you'd think that a later bedtime for a 21-month old would result in a later wake-up time.  Nope.  Not at all.  Despite the time Alice goes to bed, her little eyes pop open consistently around 6AM.  Sleep-deprivation and the NO! stage are the worst combination.

Usually, I don't require much motivation to work out but on Sunday, with the blowing snow and icy roads and temperatures hovering at 0F/-18C, Lee had to talk me into joining him for a run. I knew, though, if he went without me and I continued to sit on my butt in the warm house that I'd regret it the minute he walked out the door.  So I manned up, put on multiple layers and joined him for what we thought would just be a quick 2 miles.

When we got to the one-mile turn-around and my body had finally warmed up, I said, Since we're already out here, why don't we go another mile and make it 4 miles round trip?  He agreed so we ran on through the snow and into the wind (which was brutal, by the way).  When we reached the two-mile turn-around, I said, Wanna make it an even 5 miles? and then we trudged alongside each for another half-mile through the snow.

Then later that day I ate my weight in holiday treats, negating any sort of calories burned. Oh well.

I completed one and sort of completed another of my New Year's resolutions from last year over the last few days, one of which I'm really excited about (and no, it isn't #11).  But you'll just have to wait a day or two while I write my resolutions for next year and reflect on how I did on those from this past year.

Are you making resolutions this year?

Weekend Workouts: Saturday - TRX in the basement of my in-laws house! And a few handstand push-ups to show off for my mother-in-law. Sunday - Run! 5 miles in the blowing snow.  Brutal. 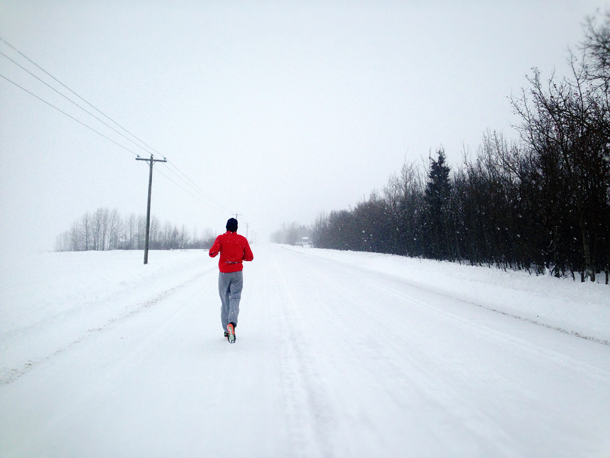 A few inches of snow covering a few inches of ice on gravel roads.
Posted by Unknown on Monday, December 30, 2013
Topics: Canada, weekends
Email ThisBlogThis!Share to TwitterShare to FacebookShare to Pinterest