In case you hadn't seen enough of the massive amounts of snow in Boston, here are a few more photos of the massive amounts of snow in Boston!  After being cooped up all morning, Alice and I had to get out of the house yesterday afternoon.  Taking her out in the stroller is impossible with the current condition of the sidewalks so I pulled on my boots, put Alice in the baby carrier and off we went!  Where did our little adventure in the snow take us?!  To the liquor store to buy this beer, of course.

Remarkably the sidewalks were in better condition than I expected.  After two winters here in Boston with the 2009-2010 winter being a snowy mess, I expected un-shoveled and impassible walks.  But they weren't too bad!  Most of the sidewalks we took yesterday had been shoveled and salted making our walk to and from beer-buying a pretty pleasant experience.

During that first terrible winter here, when out for an afternoon run, I'd often see street parking spaces that had been dug out and then there would be some random item placed where a car would normally be parked.  Lawn chairs.  Traffic cone.  I've even seen a drawer out of a dresser marking the spot!  Oftentimes there would also be a sign included on the random item stating how long it had taken the person to dig out their car and to please not take their space.  Since public street parking is difficult to find (especially when an insane amount of snow has accumulated), the city of Boston has a law that if you dig out a parking spot in what is normally public parking, you can then claim the spot by placing an item in it so that, when you get home, your dug-out parking spot is waiting for you.  Fortunately we have garage parking and don't have to deal with that whole claiming-a-spot mess! 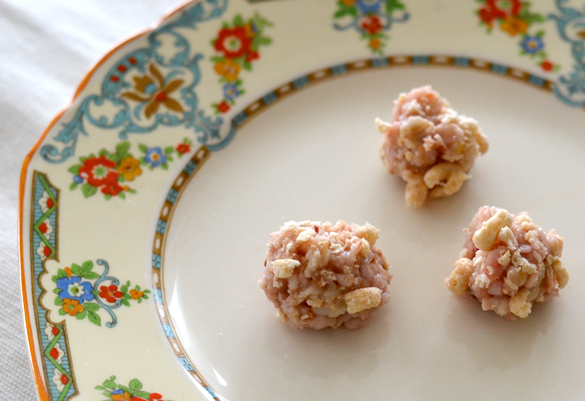 And on an entirely different topic, Alice is at the stage where she pretty much only wants to feed herself.  No, Momma!  I don't want whatever you have on that spoon!  Yesterday as I was finishing my oatmeal, I had a bite or two left and I had an idea.  I rolled the thick mixture (I like lumpy oatmeal) into baby-sized bites and then rolled them in crushed cereal and placed a few on Alice's tray.  And she gobbled them up!  I had a few left over from yesterday and gave them to her again today and she loved them all over again!  Here's what you'll need to make this ridiculously easy baby breakfast food.

Oatmeal balls for baby:
When completely cooled, drain berries of their juices post-microwaving.  Mash them with a fork and add to cooled oatmeal.  Based on consistency, add yogurt as needed until you have a thick and workable paste (I put mine back in the fridge for 15 minutes... if that doesn't work, microwave it for a minute or two more to get rid of more moisture).  Scoop out a baby-sized bite and roll it between your palms and then coat with crushed cereal.  Give to your baby and hope that they gobble it right up.  If not, eat them yourself.  They are tasty! 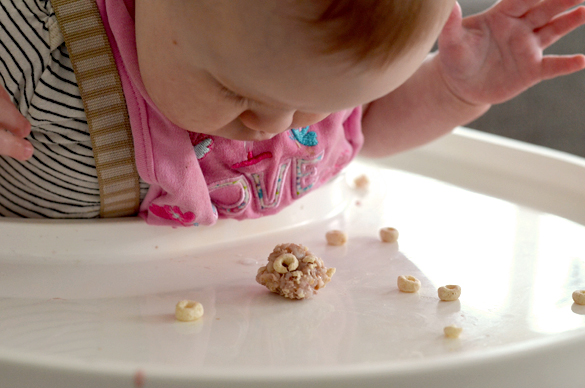 Going in for a closer inspection. Feb 2013.
Posted by Unknown on Tuesday, February 12, 2013
Topics: oh baby, recipes, weather
Email ThisBlogThis!Share to TwitterShare to FacebookShare to Pinterest