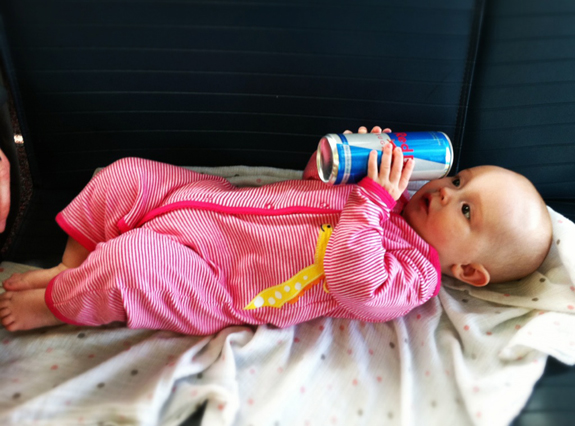 We've traveled a few thousand miles to Alberta, Canada, to enjoy a holiday with my husband's family.  It took getting up at 5AM to ready ourselves, a 6:30AM taxi to the airport, an 8:30AM flight followed by a two hour layover and then a 12PM flight, ending with a 45 minute drive to get us to where we needed to be.  Looooooooong day.  But it was worth every minute.  And Alice did pretty well for the duration of our travels.  In fact, compared to her first plane ride, she was a complete angel!

As long as our day was, I'd say that having a layover was key to keeping everyone happy.  Even though Alice is still relatively little and isn't running around (yet), it was nice to have the ability to get out of the cramped quarters of the airplane to stretch our legs.  To lay Alice down on a blanket for a kicking session.  To use a normal sized bathroom.  And to use a normal sized changing table.  Have you seen how tiny the ones in an airplane bathroom are?!  It's like playing a game of Tetris trying to coordinate getting a kid changed in there.

I used to despise having connections and layovers but now, traveling with a kid, I can see how they could become a necessity.  As long as our day of travel sounds, another little family had us totally beat.  As I was standing in the aisle rocking Alice to sleep, the dad of this family of 2-year-old twin boys and a 5-year-old little girl asked where we were headed.  When I told him we had another four hour flight after the one we were on, he commiserated with me about traveling with kids and then I asked him where they were headed.  Oh, just Tokyo.  You know, in Japan.  Like across the planet from where we currently were.  And he and his wife were traveling with three kids under the age of 5.

After I walked away, I'm pretty sure he mumbled Suck it up, lady!

What age do you think is the most difficult to travel with?  I'll admit.  Traveling with a 4-month old is pretty easy, as long as you aren't flying during the witching hour.  I'd imagine once this kid goes mobile, though, all hell will break loose!
Posted by Unknown on Thursday, August 02, 2012
Topics: Canada, family, iPhone photography, parenting advice, travel
Email ThisBlogThis!Share to TwitterShare to FacebookShare to Pinterest