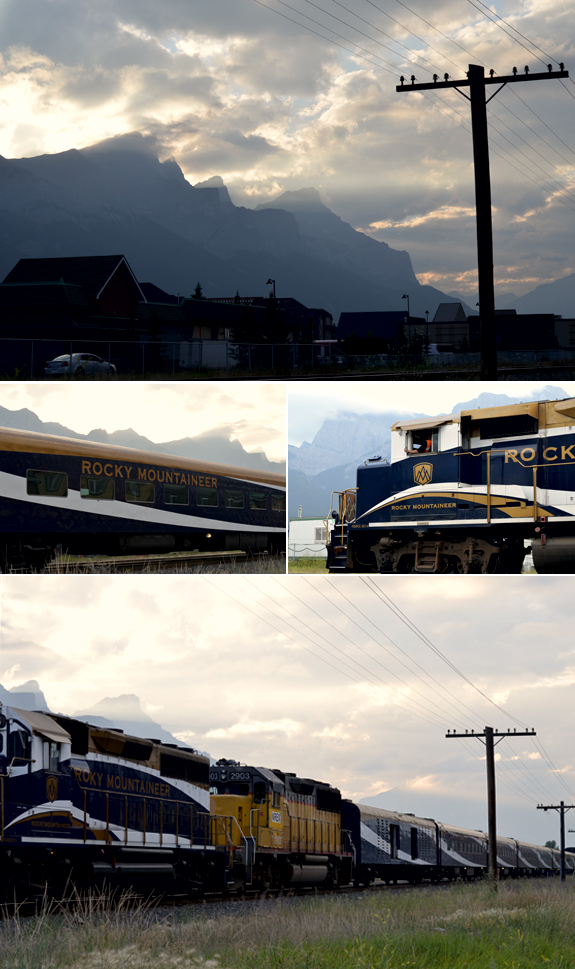 The hotel we often stay at in Canmore is a stone's throw from a relatively busy train track.  Many times throughout the day and night, you can hear a freight train rocketing by.  I absolutely love this as I find trains fascinating.  One night, after eating our dinner at the senior citizen hour of 5PM, we were back at our hotel relaxing after putting Alice to bed.  I heard the familiar sounds of an approaching train but this one seemed to be going at a much slower speed.  Being the nerd that I am, I wanted to get a closer look at the train so I grabbed my camera and ran out the door.  And just look at the beauty of a train that I found!  I'd only ever seen graffiti-covered freight trains on those tracks but here was a passenger train and it was stopped right in front of me.

I snapped a bunch of photos as I walked toward the engine and, once I got there, the conductor had his window open so I waved.  He waved back.  And then the train started to slowly roll forward.  Of course I gave him the universal honk-your-train-horn sign and he obliged with a big WOOOOO-WOOOO!

Would you ever take a train somewhere rather than flying?  My husband and I took a train from Salt Lake City to my dad's house in Napa for Thanksgiving one year.  It was totally fun.  But touring the Canadian Rockies by train?  How romantic!
Posted by Unknown on Wednesday, August 15, 2012
Topics: Canada, Nikon DSLR, vacation
Email ThisBlogThis!Share to TwitterShare to FacebookShare to Pinterest