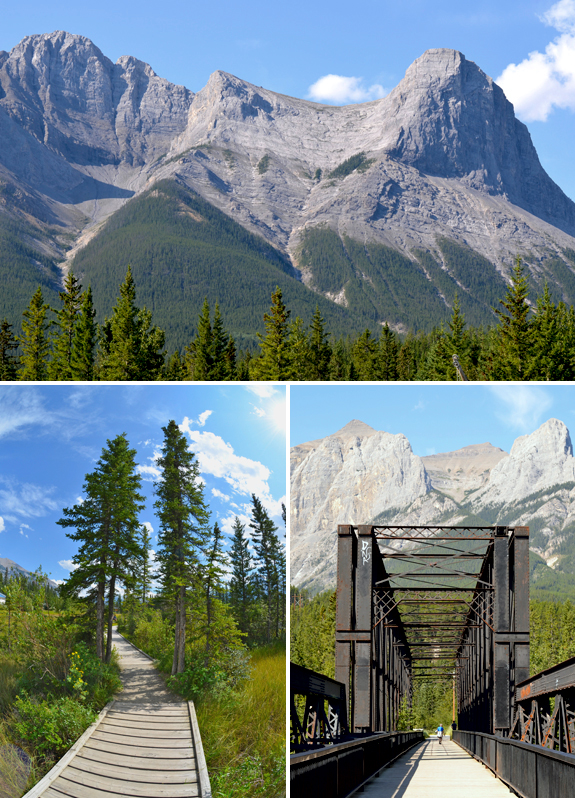 It's funny being on vacation with Alice.  You see, I've been to Canmore a few times before.  Just me and my husband.  Never with Alice.  And now, here we are.  On vacation with our daughter.  It's weird being in a place you've been before but now with a kid in tow.  The things you once did while on vacation are now somewhat difficult to do.  Mountain biking together.  Trail running together.  Late night dinners and drinks together.  Doing any of that with a small baby doesn't really work.  Sure.  We could have brought my husband's parents along so they could baby sit or we could have done some research for babysitters here in Canmore.  But we didn't.  So we've changed our vacationing ways just a bit.  And, for the most part, it's worked out pretty well.

Since we have been in Canmore, I've gotten up early and gone trail running first thing while my husband minds Alice.  Then, once I am home and showered and we've had coffee and breakfast together as a family, Lee will go out for a trail run or mountain bike ride.  During that time, Alice and I have explored the town, walked the banks of the Bow river and hiked the various trails in the area, taking photos all the while.  Then, when Lee gets home and showered, we go for an early dinner as Alice is still somewhat unpredictable between the hours of 6PM-8PM.  And then we're home by 7PM to put Alice to bed.  It feels a bit scheduled and not-so-vacation-like doing it this way, but it has worked.

Tonight (Sunday) was somewhat of a disaster.  Lee and his brother went for an afternoon mountain bike ride.  Alice and I went hiking.  We reconvened at the hotel for showers and after-activity beers and then went to dinner around 5:30PM.  By the time we got to the restaurant, Alice was restless.  By the time our pre-dinner drinks arrived, my husband was walking around outside with her.  By the time the appetizer and wine arrived, we'd switched off and I was outside with Alice.  I tried nursing her at the table but she was having none of it.  Fighting me.  Arching her back.  Cranking away.  My husband offered to take her back to the hotel, but I decided it was best if I do, so I wolfed down my dinner and walked home.  Of course, Alice was cooing and talking the whole walk back and then was smiling and happy as I put her in her pajamas.

But now she is asleep.  And I am enjoying a glass (or two) of wine by myself.  Waiting for the to-go dessert that I know is en route.  Not a bad way to end an evening.

Do you have any similar experiences of vacationing with your little one?  Do you bring built-in babysitters or just manage your vacation around your kid?  It's funny to think how different it will be if we vacation again here next year.  Just how much she'll have changed in a year's time.  Next year, though, I think we'll invite Grama and Grampa.  You know, in hopes that they'll babysit while Lee and I go gallivanting about town.  Good idea, right?
Posted by Unknown on Monday, August 13, 2012
Topics: Canada, mtn biking, Nikon DSLR, oh baby, trail running, vacation
Email ThisBlogThis!Share to TwitterShare to FacebookShare to Pinterest