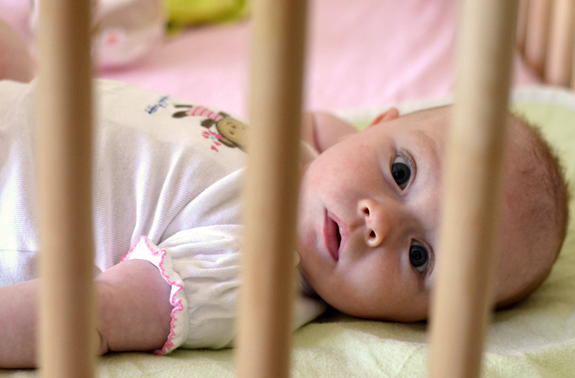 There is a dirty little word in the world of ways to parent.  In my three short months of being a mom I've noticed that this concept is very hush hush and taboo and very few will admit to doing this type of parenting.  Not many will admit to it even though families have been doing it for years.  Hundreds of years, really.  But I'll admit it.  I'll admit that we do this because it works for us.

I'll admit that we co-sleep with Alice.

I understand that co-sleeping is controversial as the American Academy of Pediatrics does not support it.  And they don't support it for very good reasons.  It can be dangerous if certain precautions are not taken.  But the brush that paints co-sleeping as a wrong and irresponsible type of parenting is very broad.  And it doesn't apply to everyone.

To be clear, we don't co-sleep 100% of the night.  Alice always starts the night in her crib.  Between 8 and 8:30PM, Alice has her last meal of the day and then goes to sleep in her crib (which is currently in our room).  We dream feed her around 10PM and then she sleeps until about 4AM (sometimes earlier, sometimes later) at which point I bring her into our bed so that I can nurse her while lying down and then I am still able to get some rest.  And, on most days, we are up between 6AM and 7AM, which means Alice only spends a few hours sleeping with us.

Honestly, co-sleeping saved my sanity in those early newborn weeks.  Getting up every hour and a half to feed Alice was really taking its toll on my mental health due to sleep deprivation.  As soon as I learned to nurse Alice while lying down, I was able to meet her needs while also taking care of my need for more than just two hours of continuous sleep.

What are your thoughts on co-sleeping?  The reason I bring this up is that in my Mommy class yesterday (we signed up for another... more on that in a later post), a fellow new mom was talking about her baby's sleep habits and she reluctantly brought up the fact that she co-sleeps with her baby similar to how we do with Alice.  And she got so embarrassed and ashamed to admit that she does it.  Her reluctance to admit something that was working for her little family got me thinking.  We have become a society driven by fear.  Sometimes that fear is good and needed and sometimes that fear is a little off base.  And I think co-sleeping is the perfect example of this.
Posted by Unknown on Friday, June 29, 2012
Topics: breastfeeding, fears, Nikon DSLR, parenting advice, play date
Email ThisBlogThis!Share to TwitterShare to FacebookShare to Pinterest