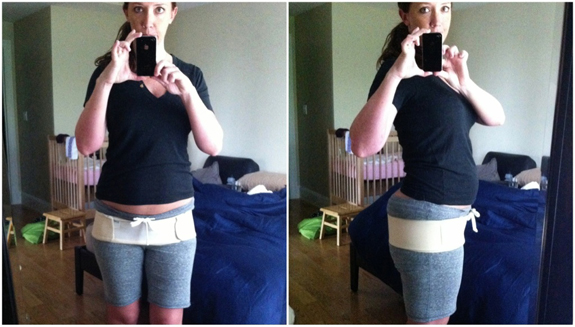 One morning while waiting for an OB appointment, I was reading a pregnancy magazine my doctor had at her office and I saw an ad for a product that stated it can help reshape your hips after pregnancy!!  During pregnancy your body releases a hormone called relaxin which causes pelvic and cervical relaxation and expansion... which is a nice way of saying your hips and butt get wiiiiiiiiiider.  And who wants that?  So this magazine ad stated that, after pregnancy, if you wear their hip belt you can help reshape and resize your widened pregnancy hips.  The theory is that because relaxin stays in your body for up to 8 weeks post-delivery, you can manipulate your pelvis/hips by using a binder to push it all back together.  And who doesn't want skinner hips all for the bargain price of $55.99?!

Almost 7 weeks post-delivery and just over 6 weeks since I started wearing the hip shrinker, I am happy to report that I have lost 1.5 inches on my hips since being 40 weeks pregnant.  Some of that may be weight loss, some of it could have been pregnancy water retention but who cares!  Inches lost are inches lost!

And, I have to say, wearing the hip belt actually felt kind of good on my loose pregnancy joints.  It felt like it stabilized my pelvis and it helped remind me to hold in my core muscles.  I also used an abdominal binder post c-section which helped contract my uterus and helped my loose abdominal muscles stay engaged.  And I am happy to say that I am down 2.5 inches in my waist since 2 weeks post-delivery.

I will say that it made my butt look pretty funny while wearing the Shrinkx Hips.  To wear it properly, it has to go directly across the middle of your bottom, which gave me a flat butt with a nice bum bulge at the top.  Not cute.  So I didn't wear it out of the house but wore it between 8-10 hours during the day while at home.  Obviously I don't have much of a social life with a newborn.  And I bought a pretty generic abdominal binder from Amazon and it did the trick but has no bells and whistles like some of the more expensive binders.  My only complaint with the one I used is that it would sort of ride up and fold over so I found myself adjusting it more frequently.  But I only wore the abdominal binder for two or so weeks and then I focused on pulling in my abdomen and engaging my core instead.  I think next time (if there is another wee one), I'd buy this abdominal binder instead.

Does hip and abdominal binding post-pregnancy work?  I think it does.  And, along with exercise, it made me feel like I was actively doing something to help reshape my body.  If we decide to have another baby, I will definitely do this all again.  But, right now, the thought of having another newborn makes me a little nauseous!
Posted by Unknown on Sunday, May 06, 2012
Topics: oh baby, post-baby
Email ThisBlogThis!Share to TwitterShare to FacebookShare to Pinterest