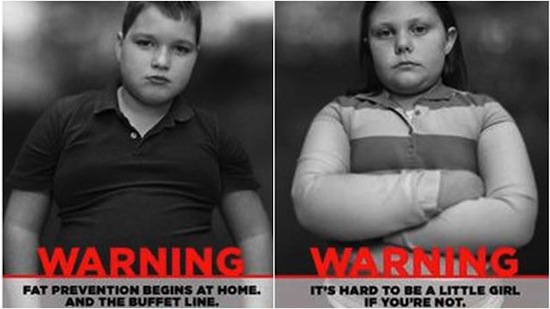 I saw this interesting story on the news last night.  There are controversial TV and billboard ads running in Georgia about the childhood obesity epidemic running rampant in that state.  Some people say the ads are too harsh.  That they are too mean.  That they only blame the parents when others should share that blame.

I think people need to have this problem thrown in their faces.  I think parents need to realize that they are responsible for what their children eat and their children's level of activity.  Sure, big bones and being large runs in families.  But that does not account for the 40% of children in Georgia that are considered to be obese.  40% of them don't have bad genetics.  They have bad habits.  And something needs to change.  Hopefully these controversial and harsh ads help wake people up about the growing epidemic of obesity in this country.

Do you think these ads are too harsh?  Nope.  Not at all.
Posted by Unknown on Tuesday, January 03, 2012
Topics: people suck, politics, soap box, yuck
Email ThisBlogThis!Share to TwitterShare to FacebookShare to Pinterest