So my husband was on dinner duty over the weekend as I had to work both days.  And man, did he hit it out of the park!  That guy always finds awesome recipes and they always come together deliciously.  The salad he made was probably one of the best salads I've had in a long time.  Maybe ever.  No joke. 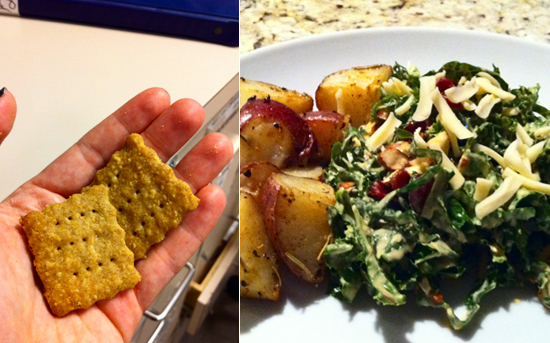 I tried to find the recipe online but it wasn't listed (he found it in a magazine) so I will type it up in all its glory, just for you.  And besides, he modified it a bit anyway.  And it came out so good.  Here you go.

Spicy Cesar Dressing:
Simmer the whole cloves of garlic in the milk until soft, about 20 minutes.  Blend all the ingredients together (except the olive oil) into a fine paste (it'll be watery), then slowly incorporate the oil (you'll have leftover dressing... just store in an airtight container in the fridge and eat it on anything and everything over the next 2 days).

Now build your salad:  Using enough kale to serve two people (our salads were huge), chiffonade the leaves, leaving out the tough stems and set aside in a large bowl.  Roughly chop about a cup of raw almonds and roast in a heavy duty skillet over med-high heat until they begin to become fragrant and golden-brown (don't burn!).  Remove from heat and set aside.  In the same skillet, cook a 1/2 lbs or so of bacon until crisp and let cool and drain on paper towels.  Toss the kale with the dressing and add the nuts and crumbled bacon.  Plate your gorgeous salad topped with a handful of grated Gouda.  He served ours with simple oven-roasted potatoes.  Enjoy.  Share, if you must.

You guys.  When Lee told me we were having a kale salad for dinner, I had to hold back my gag reflex.  Sure, I like kale in stuff but I hadn't really given it a chance as the main ingredient to a dish.  I was totally wrong.  This salad with the kale and the dressing and the bacon and the roasted nuts and the Gouda all together?  I could eat it every single night and not get sick of it.  Seriously.  It is that good.  And I would eat that dressing by the spoonful if I could.  Now I bet you are gagging.

My husband also made homemade cheesy crackers that are out-of-this-world.  Check out the recipe and the NY Times article on homemade crackers.  He just rocked in the kitchen the past two days.  Maybe I should start working weekends more often.

Do you share dinner duty at home?  Who does the majority of the cooking?  It's pretty equal around here.  When I work, my husband cooks.  When he works, I cook.  It works for us and saves us a ton (time, money, and HEALTH!) by not eating out.  We try to limit our eating out to less than once a week.  That equals A LOT of trips to the grocery store, for sure.
Posted by Unknown on Monday, December 19, 2011
Topics: husband, iPhone photography, R.N., recipes
Email ThisBlogThis!Share to TwitterShare to FacebookShare to Pinterest