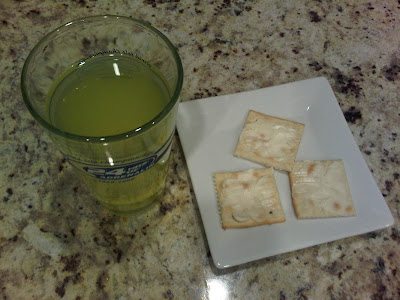 There is nothing more terrifying than being woken up out of a dead slumber with the urge to vomit.  That was me at 3 A.M. this morning.  Here's how it went down.... I didn't feel so hot after dinner last night (leftovers.... DAMN YOU!) so I went to bed early thinking if I went to sleep, it'd go away.  Nope.  I laid there, tossing and turning... moaning and groaning... not getting any sleep (Lee wasn't either).  I must've drifted off at some point because the next thing I knew, I was jolted awake with that horrible tingly sensation in the back of my throat and I was pretty certain what was coming next.  I hurtled my half-asleep self towards the bathroom, retching as I ran.  I almost made it to the toilet in time.... but I will spare you those details.  Poor Lee heard me and ran to the door and helped me as best he could.

My dilemma then became... now that I've emptied the contents of my stomach, would I feel well enough to go to work in a mere 3 hours?  When I suggested this to Lee he looked at me like I was crazy and said, 'You're not going to work today.'  So I called in sick.  I eff-ing hate calling in sick especially at a job I've only worked at for 5 weeks.  But gauging how I felt at 3 A.M., I figured he was right and I wouldn't have been capable of taking care of sick people when I was sick myself.

I still felt like death warmed over when I got up with Lee at 6:30 A.M. and the thought of food or liquid going into my stomach was appalling.  I camped out on the couch with a bucket and Gatorade and tried to will my body into getting better.  Not even watching last night's episode of 'the Bachelor' helped me feel any better.  A few naps later, I was feeling more human... and now I'm stomaching a delicious dinner of Gatorade and saltines topped with butter.... hey, don't knock it till you've tried it.

What is your go-to food/drink when you feel under-the-weather?  Saltines topped with butter, all the way.  And half-strength Gatorade.  And Sprite.

When was the last time you puked?  I rarely puke.  But in the last 6 months, I've definitely puked twice and no, they were NOT alcohol-related.  Before that?  It had been years since I'd up-chucked.
Posted by Unknown on Tuesday, February 15, 2011
Topics: yuck
Email ThisBlogThis!Share to TwitterShare to FacebookShare to Pinterest