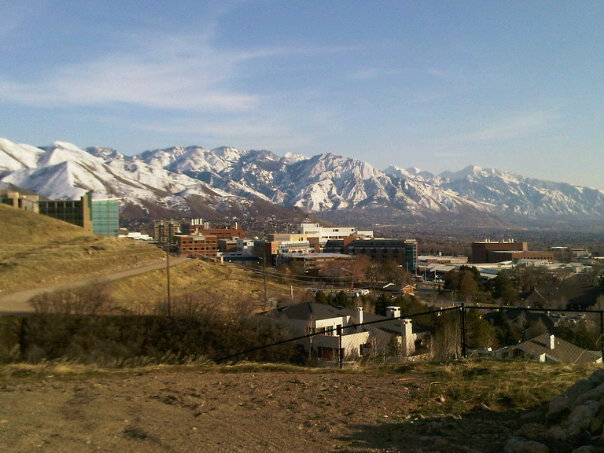 I took this picture at the bottom of the Dry Creek trail after a mountain bike ride with Lee. We'd just finished an awesome 3-hour ride... our first one of the season!

Don't get me wrong... I love to be physically active. For over 10 years I've been an avid runner, a self-described running 'addict'. I did my first marathon at age 19 and, ever since I crossed that first finish line, I've felt the desire to do more.

But let me tell you why I also love to be physically active....

I've never been one of those 'blessed' individuals that can 'eat-what-ever-they-want-and-not-gain-a-pound' type of people. I've always had to work to keep my body thin and in shape, much to the chagrin of my healthy appetite. I admit that my eating habits weren't always 'healthy'... (and I'm talking a loooong, loooong time ago, like circa 1997) and I struggled with the whole starving vs. purging ordeal. I have to say, though, I wasn't a very good bulimic or anorexic because I hated throwing up and I never had enough self-control to starve myself... which, in the long run, I guess was a good thing.

Fortunately, I've outgrown those tendencies but I'm left with the 'good food, bad food' and occasional 'food guilt' thoughts. 'Good food, bad food' is exactly as it sounds... some foods, like vegetables or fruit, etc., are categorized as 'good' and foods like candy or chips or ice cream are categorized as 'bad'. Obviously, I feel 'bad' after eating the 'bad' food and 'good' after.... well, you get the picture. 'Food guilt' is also exactly like it sounds... you eat half a bag of potato chips and you get 'food guilt', like 'Why the eff did I just eat all of that?!?' I have to say that I've almost gotten over the 'good/bad' food and the 'food guilt' issue and I now realize that I can eat pretty much anything I want... in MODERATION. Now the moderation can sometimes be a problem for me. I don't know what it is about me and candy but when its around, I can't help but put it in my mouth. I absolutely DO NOT buy candy because I know I have no self-control when it comes to having it in my house. My problem is that I work with a bunch of candy addicts and they always seem to have it with them and are always more than willing to share (hey, misery loves company, right?). I also have this moderation problem with other foods... if it can be described as 'junk', then I probably love it.

(*Disclaimer.... usually I eat really pretty healthy... but then I'll have a 3-day span where all I want is partially hydrogenated, high-fructose corn syrup-laden whatever and I'll stop at nothing to get it....)

I do know that I love to run (and bike and hike) but I sometimes wonder if I also have a sense of obligation to do those things out of guilt for what I might have eaten that day or the night before? Who knows.... here's to hoping my metabolism doesn't take a nose-dive in the next couple of years.

And P.S.... I love being 31 years old. I remember asking my dad what his favorite time of his life was... and he answered, "Right now... because I am alive and healthy."