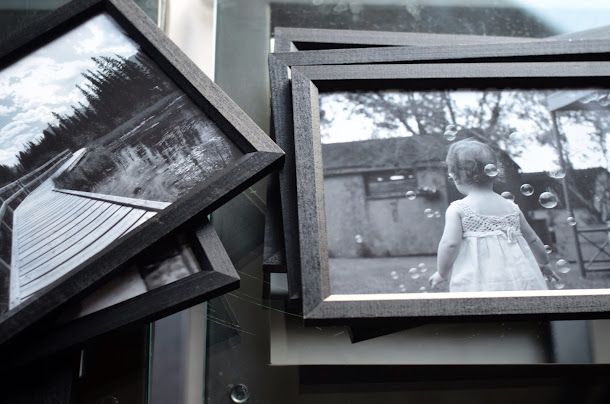 A few of the frames + prints for our soon-to-be photo wall.

As I suspected, day one of my Whole30 wasn't that big of a deal. A trip to the bakery and my usual happy hour didn't even phase me! But I know it'll get more difficult later in the week so I'm not even remotely patting myself on the back just yet. Rough seas are ahead, I'm sure.

Lee said something interesting to me after I got home from my three-day trip to San Francisco. He told me that Alice behaves very differently with him. Having heard this before from family who have spent time with Alice without me, I pressed him to give me some specifics. And he came right out and said that Alice isn't nearly as whiny or clingy when I'm not around.

I tried not to take what he said personally as I know he doesn't mean it that way. I've also come to this conclusion myself after having spent a month with my in-laws and listening and watching her interact with her grandma when she didn't know that I was just around the corner. And interestingly, the second I would come back into the room after having been away from her for an hour or two, she would start her usual stuck-to-my-side and whiny behavior.

I don't believe I foster a clingy-ness or dependency in my daughter and, in fact, I'd say that I try very hard to instill the opposite in her. But for some reason, her ability to be independent is forgotten when I'm around. I know I need to cherish these moments where she wants me to hold her all the time and, for the most part, I do but it is hard to enjoy those moments when they happen for the majority of our day together.

God forbid I put her down to pee or brush my teeth or answer an email.

So today, I did an experiment! I think a lot of Alice's whininess comes from boredom so I gave her a bowl of dry barley and a spoon and a few containers to transfer the little grains into and she entertained herself for almost 30 minutes straight! And then when she was finished with that game (and there was barley ALL OVER the floor) I grabbed a broom and a dust pan and she "helped" to clean up her mess (thanks for the idea, Lauren!). Seeing her ability to entertain herself helped me realize that I could do a better job of giving her something to do and then encouraging her to stick with it without me right there.

I don't know what will be harder... finishing the Whole30 or teaching my toddler to be more independent.

Any ideas? Having her help me with jobs has been great and we do a lot of that during our day together but the second I need to do something that doesn't include her (like put on my makeup or have a conversation with Lee), she starts whining and asking for me to pick her up. Over and over and over and over!