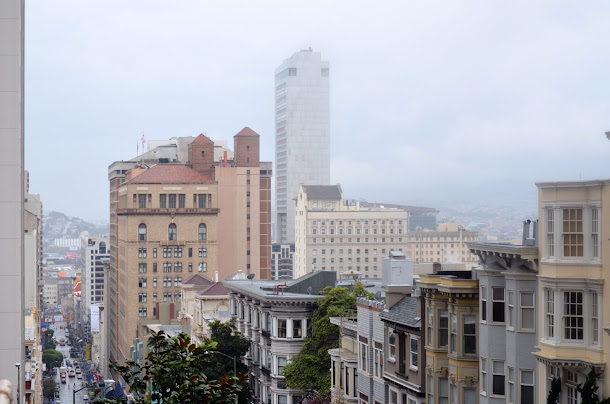 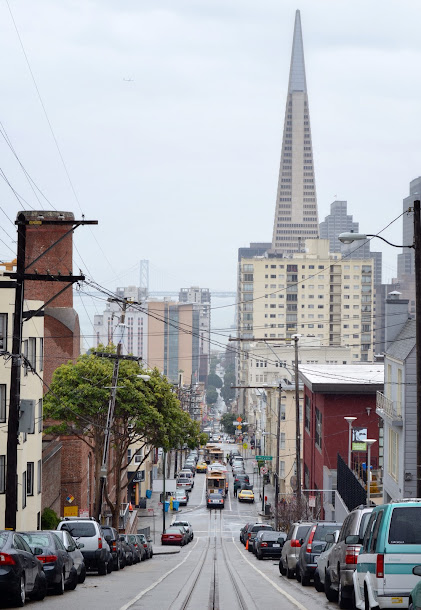 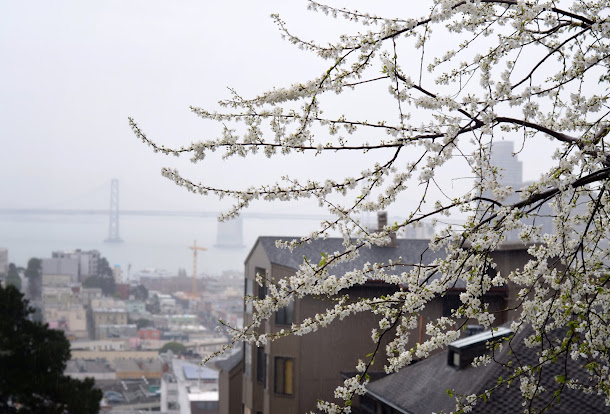 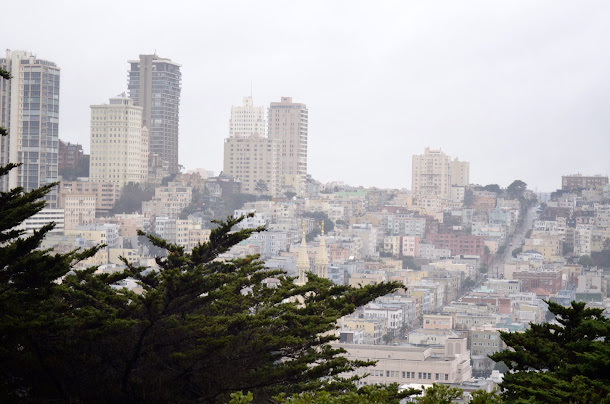 After Amanda's spin class on Friday morning, we headed into the city for sight-seeing, rainy day be damned. Glen Park, where my sister lives, is a quick 8-minute train ride to the Civic Center in downtown San Francisco. We started there and then walked to Union Square for a tiny bit of shopping. After one store, we were both finished so we continued our walking tour up to Nob Hill (tried going to the Top of the Mark for some views of the city but it was closed) and then down into the residential areas of the Tender Nob, as my sister tells me it's called.

I would live in that area just so I could tell people that's where I live. If I could afford it, of course. Those houses!!

Our goal was to eventually get to Coit Tower for the views and to hopefully see the famous green parrots of Telegraph Hill so we continued our walk in that direction, walking through North Beach and Chinatown. At that point the rain was really coming down but luckily we both had umbrellas as we walked our wet pant legs and soggy shoes up the hill to Coit Tower.

The views from up there were amazing! Even on a rainy day.

The Golden Gate Bridge barely peaked out of the clouds enough to be seen by the eye but not so much by my camera, but fortunately I'd been to Coit Tower before on a sunny day when we were here for our babymoon and had seen it clearly then. And seriously, the houses up there and the views they have?! Unreal.

We walked down the slippery steps of Telegraph Hill in hopes of seeing the famous parrots who have mysteriously taken up living there but, from what my sister told me, their sightings are rare. We got to the bottom of the first steps and were crossing a narrow street to get to the top of the next stairs when my sister started to freak out and look skyward saying, "I hear them. I hear them!"

Having lived in the jungles of Panama for two years on a little piece of land jutting into the Caribbean, she'd become accustomed to the sounds of parrots squawking in the trees outside of her little house. So I quickly looked up! And saw a flock of brightly colored green birds with fiery red necks fly directly over our heads.

We saw the famous parrots of Telegraph Hill!

They were gone as quickly as they came but we were both giddy with excitement having just seen tropical birds living in a California city. We continued our walk down the stairs toward the Embarcadero and, when we got to the bottom, my sister said she could hear them again! And then we realized the sounds were coming from the trees at the top of another set of stairs climbing Telegraph Hill. So we climbed them again. And this time we saw sixty or so parrots (called green conures) sitting on the balcony of one of the beautiful houses on the hill, just squaking and soaking up the rain. 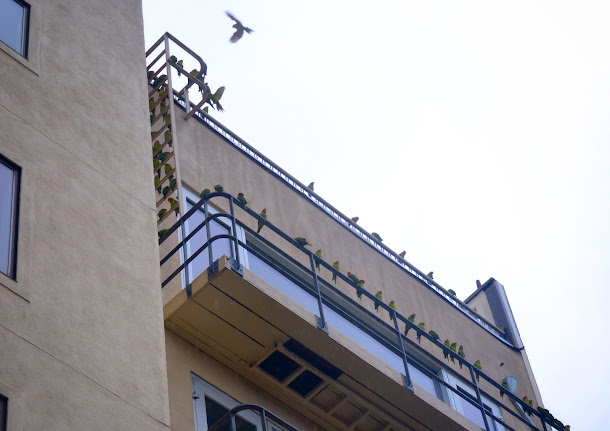 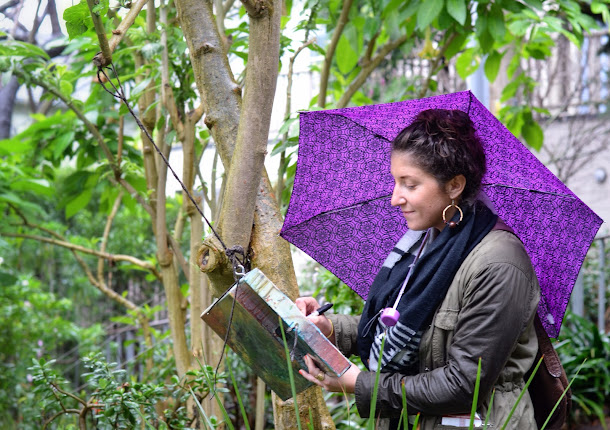 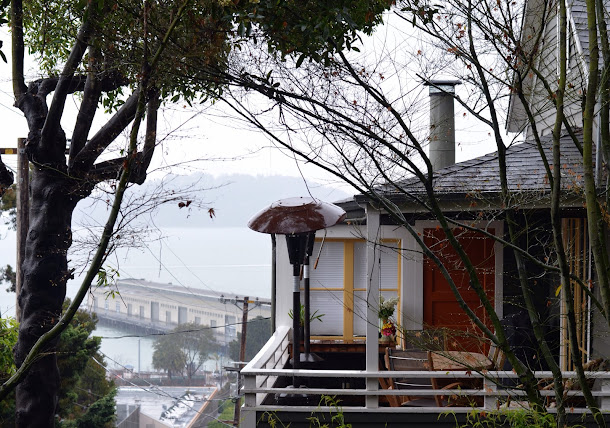 The parrots! // Art that hangs in a tree on Telegraph Hill. // Can you imagine living there?!

After all of that walking (we figured we walked at least 5 miles), we headed to the Embarcadero for drinks and lunch. We stopped at a place on the pier called Coqueta that had a beautiful view of the Bay Bridge from the bar.

We ate tapas and drank margaritas with grey salt foam (!!) and enjoyed drying off a bit from our day of walking the city in the rain. It was a perfect day, rain be damned.

And, this afternoon, back to reality, my loves, and our newly installed 3-form wall. It's official. We no longer share a room with our toddler!

Weekend workouts: Saturday - Spin!! My sister is an awesome instructor and kicked my ass, once again. Sunday - Travel day! And a much-needed rest day. 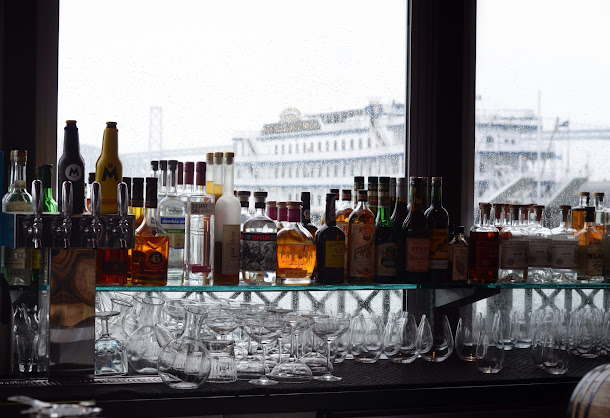 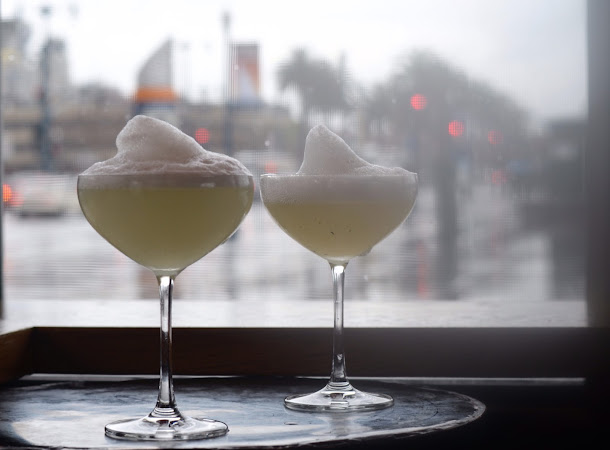 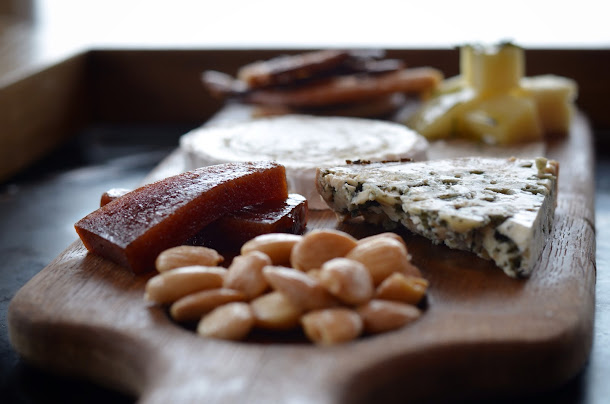 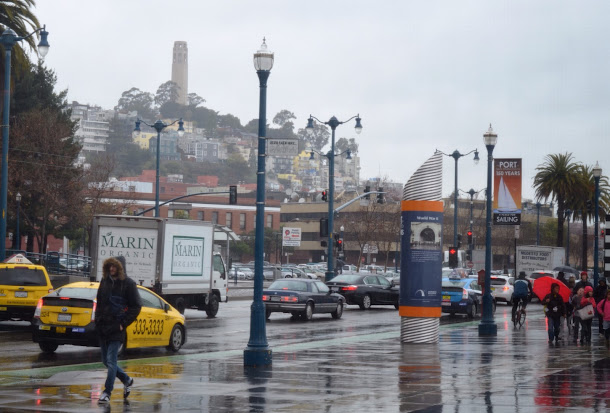 Views from Coqueta. I love this city!