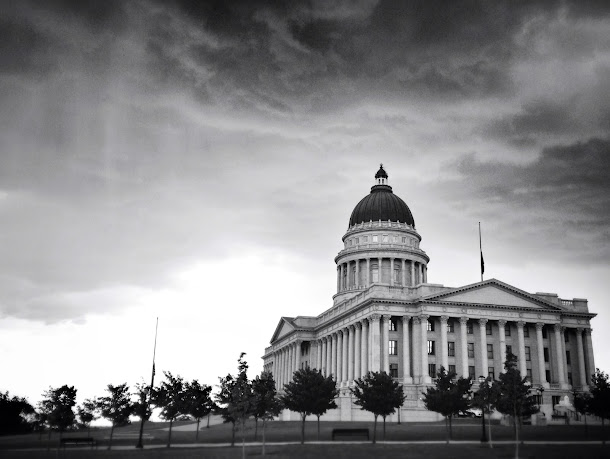 I don't often talk politics here on my blog even though I am a bit of a junkie for political and polarizing issues. But on the heels of the President's State of the Union address on Tuesday night, there is something I feel compelled to write about as it is directly affecting my family.

And that is Obamacare.

In our working lives, Lee and I have always worked for large companies that provided healthcare to their employees at a relatively small cost. But now that neither of us are working, we don't have the luxury of our employers paying the majority of our health insurance premium. When Lee left his job back in September, we were offered to stay on the company's insurance but we'd then be responsible to pay the entirety of the premium (known as COBRA continuation coverage).

And we found out that we could stay on that insurance plan for the bargain price of $1900.

That is an outrageous amount of money to pay each month for health insurance and would eat up what we have set aside specifically to pay for it in no time. To be fair, it was slightly less expensive before the new year but as of January 1st, we'd have to pony up some ridiculous coin to stay insured on that plan.

So we did some research! Talked to friends and family who are also self-employed and are benefitting from the implementation of the Afordable Care Act. And then we found an insurance plan for our family of three through the healthcare exchange website that will save us over $1200 a month.

I'd like to dispel a few myths that I've heard those talking heads on you-know-who News say and that I've found to be completely untrue. If you are a naysayer of Obamacare, you've probably heard that people have had their health insurance policies canceled due to the implementation of the Afordable Care Act. And you're right! This actually happened to my parents who are small business owners and don't have corporate insurance! But when their old policy was canceled, they were offered an almost identical insurance policy through the same insurance company that met the more strict healthcare law standards and included their same doctors but that could NOT deny coverage for their pre-exisiting conditions or put a lifetime limit on what it will pay.... all for $400 less a month than they were previously paying.

I imagine my parents would like to thank you, too, Mr. President.

Of course this new healthcare system has it's flaws and no system will ever be perfect, but from what I've seen so far, it is certainly working for my little family.

And a look back at what my Canadian-born husband wrote about how he sees the Canadian healthcare and political system now that he has become an American and has experienced our system for himself.

What are your thoughts on the Afordable Care Act, a.k.a. Obamacare? As an E.R. nurse who has experienced the flaws of our healthcare system firsthand, I'm hopeful that requiring people to carry health insurance will make them more accountable for their overall health, which in turn, will lower all of our healthcare costs. But maybe that's just wishful thinking.

Posted by Unknown on Thursday, January 30, 2014
Topics: politics
Email ThisBlogThis!Share to TwitterShare to FacebookShare to Pinterest