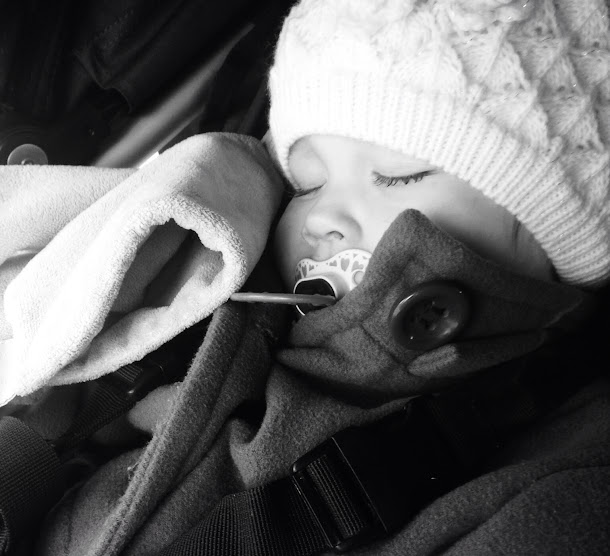 Asleep in the stroller after a particularly tough morning.


On most mornings, while the warm fall weather still lingers, Alice and I get out of our loft early so that Lee can work on our many home improvement projects. We have a few places we like to go but mostly Alice asks to go to one place: Dino-land. At one of our local malls, there is a children's play area in the food court and it is filled with dinosaurs that kids can climb, slide, and play on while the parents watch.

Last week Alice had an interaction with an overly rambunctious 4-ish year-old boy who was also playing at Dino-land. Alice was minding her own business, working on taking steps off a small object all by herself when this little guy came up and shoved her, making Alice fall down. This kid's dad was totally checked out, sitting at a table outside of Dino-land with his face buried in his cell phone. So I scolded the kid a little and asked him not to touch her. Please. And then I tried to calm down my overly sensitive 19-month old.


He runs off and then, five or so minutes later, he's back and as he runs by Alice, he shoves her again. She falls down. And she wails. The dad hears the commotion, walks into the play area and says Did he hit her? I've told you not to hit other kids!

We've been back to Dino-land a dozen times since this incident and, if that kid is there (which he often is), Alice is a clingy mess and won't leave my side. And this kid seems to sense her anxiety and is always playing right next to her. His dad is still not paying any attention so I've moved Alice to the other end of the play area and the kid follows! I've asked that he not play near her but he's 4 so I'm pretty sure he doesn't get it. I've tried talking to Alice and telling her she just needs to relax and not play near him but she's 19 months so she doesn't get it either! And I did say something to this kid's dad but he doesn't seem like the type of parent who gives a shit.

So basically we are avoiding Dino-land if that kid is there. Or until Alice grows big enough to stand up to the Dino-land bully.

Weekly workouts: Monday - Due to day-long construction, rest day! Tuesday - CrossFit! 20 chest press @ 80% (85lbs) + 30 bent over rows (65lbs), then 5 rounds for time of 5 handstand push-ups (1 ab mat and I can kip!) + 10 pistols (I did mine to a one-legged seated position on a box, back up) + 12 pull-ups (blue band). Wednesday - CrossFit! Lifting-only day! Work up to a heavy single for clean & jerks (110lbs). Thursday - CrossFit! My hip flexors are still tight so instead of front squats, I did 5 sets of 3 deadlifts (145lbs), then 400-meter run + 400-meters of walking lunges + 400-meter run. I counted 395 walking lunges in 400 meters. Ouch. Friday - I can barely walk today. Rest day! But I did rake two garbage cans full of leaves at my mom's house.
Posted by Unknown on Friday, November 15, 2013
Topics: oh baby, parenting advice
Email ThisBlogThis!Share to TwitterShare to FacebookShare to Pinterest