Before dinner yesterday afternoon, Alice and I got out to the park near our apartment.  After a rainy and gray day, the sunshine finally poked through bringing a handful of kids out to the playground to enjoy the remaining daylight.  Most of them were older than Alice but a few were at the toddling stage which she isn't far from.

And she was in awe of all that those kids could do!

At first she just sat and watched them scurry up the stairs, scamper through the tube and then slip down the slide.  And then it was like, all of a sudden, she thought, Wait a minute. I wanna get in on this playground action!  And she was off, following every little kid that came near her, trying with all of her might to keep up with them despite being on hands and knees.

There was one little boy in particular about a year older than Alice who was doing loops up and around the equipment near where we were sitting and every time he would come by, Alice would squeal in delight as she watched his little toddler legs tromp by her.  On one round, as he came by at a slower pace, Alice had just enough time to show him her newest trick.

And she gave him an open-mouth kiss right on the lips.  I guess she's just establishing herself as the little redheaded tart of the park! 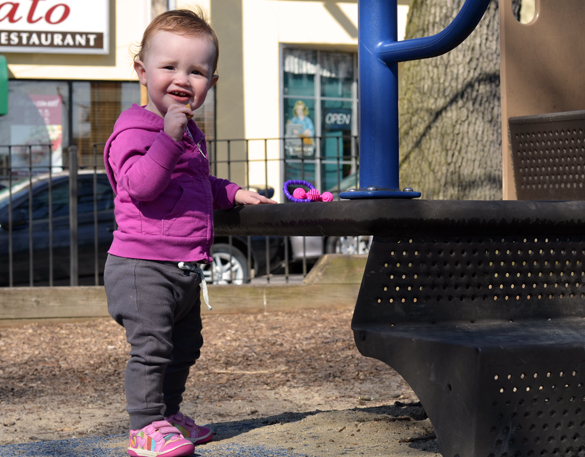