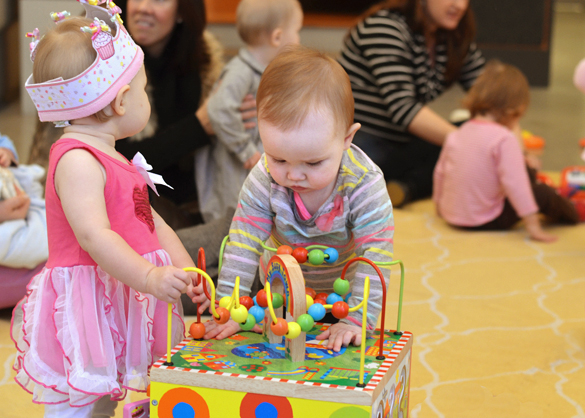 Alice trying to act cool around the birthday girl.

Alice and I had a rough start to our Friday. Because we needed the car for an afternoon birthday party, and since we are a one-car family, we drove Lee to work first thing after Alice had breakfast. We arrived at Lee's office, he kissed us both goodbye, and then Alice and I headed home to get started on our unusually busy Friday. Alice was chatting away to herself during the ride but, as we neared home, she got noticeably quieter. I figured she must be getting tired since we were nearing her morning nap time. As we sat at a red light about four miles from home, I heard a rustling from the backseat followed by a retching and then I heard the contents of Alice's stomach exit her little body. Of course I panicked that she was choking or couldn't breath as all I heard was retching and vomiting but then Alice let out a sad little whimper followed by a What-just-happened-to-me?! wail.

The light turned green and I pulled over to the side of the road so that I could get back there to comfort and clean her up as much as possible. Since Alice's car seat is still rear-facing and we don't have a mirror placed to be able to see her while driving, I didn't know how bad the vomit situation was. And, wow. It was bad. Like I didn't know such a small person was capable of producing such a large amount of puke! The poor girl was covered from head to toe. And so was the backseat of my car! As I wiped her little face off with my bare hands I realized I'd run out of the house with nothing but my wallet. No diaper bag. No wet-wipes. Nada! And our car had absolutely nothing I could use to sop up the mess. I felt terrible trying to explain this to her as I climbed back into the driver's seat and raced home. Surprisingly, after only a block or two, she started happily chatting away to herself, obviously feeling much better having just up-chucked her entire breakfast.

So that was fun start to our day!

Luckily this incident doesn't seem to have been caused by a stomach bug as Alice was her happy little self for the remainder of the day. And after a good scrub of my car and Alice's car seat, we were still able to make it to that birthday party.

I'm not entirely sure if her barf-o-rama was caused by the full-stomach-and-bumpy-car-ride combo or if it was finally the fruition of this fun little trick she's been doing lately where she intentionally sticks her fingers down her throat until she gags. Whatever the cause, hopefully it won't happen again anytime soon! 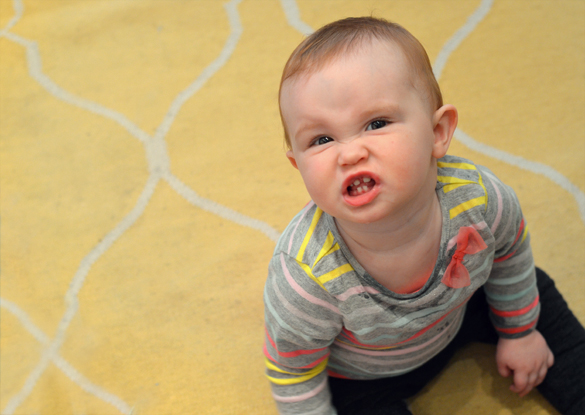 Any fun kid-in-car-vomit stories?!  Here's the thing about puke.... as much as and as thoroughly as you clean the area, every once in awhile, you get a whiff and are instantly reminded of what happened there.
Posted by Unknown on Monday, February 18, 2013
Topics: parenting faux pas, play date
Email ThisBlogThis!Share to TwitterShare to FacebookShare to Pinterest