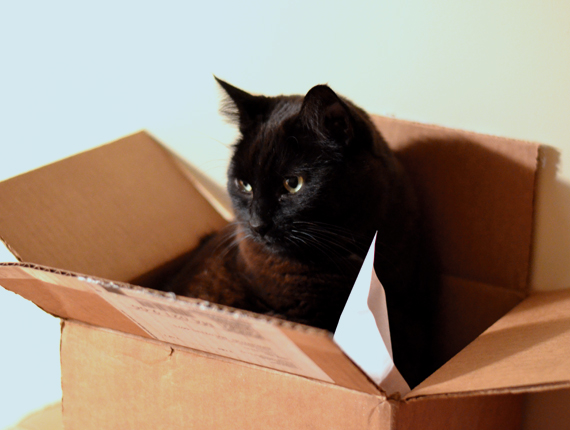 Big Kitty. In a box.

A funny thing happened over the weekend:  We had our car seat inspected.  In Massachusetts, it isn't required by law to have your car seat inspected after installation but, after hearing the statistics that 90% of car seats are installed incorrectly, making them useless in a crash, we decided it would be a good idea to have an expect check ours out.  So, if you know me, you know I am a bit unconventional... a bit of a going-against-the-grain-type of person.  Wondering why I bring this up?  Here it goes.

We forwent the convenience of the infant seat and went straight for the convertible car seat.

I know, I know.  The infant seat is just so convenient, right?  Hear me out:  I spent a lot of time researching whether or not we needed an infant seat.  We have one car.  I don't drive all that often.  We live in a city with awesome public transportation.  I had no desire to buy another stroller for that snap-n-go option.  And they aren't necessarily safer for your kid.  So, in my mind, the convenience of the infant seat seemed to lessen as I thought about all of those things.  The other reason we didn't get the infant seat and went straight to the convertible is to try to eliminate one baby item we needed to buy.  One less thing to clutter up our apartment.  One less item to eventually go to the landfill.  So I researched convertible car seats and found a very safe model for an infant of 5 lbs (rear-facing, of course) up to a kid of 70 lbs (forward-facing).  We got it.  Lee installed it.  We were good to go.  Right?  Wrong.

So we get to the car seat inspection place and the guy immediately takes out the car seat that my husband spent a good chunk of time putting into our car.  No biggie.  My husband was miffed but I would be, too, if all my hard work went out the window in 2 seconds.  So the guy (who was a detective for the police department) starts telling us all sorts of info about this particular seat and its tethering and its LATCH and the rear-facing blah, blah, blah and how it won't tether in the rear-facing position in our car (but it will LATCH or shoulder-belt in just fine) and how he can give us a brand new infant seat right now (for free) and hey, why don't we just do that and, next thing you know... he has installed an infant seat into our car, put our convertible seat into the trunk, shooed us out the door and said Good luck with your baby!

There was more dialogue than that, of course, but my point is that, after months of researching what was best for us, all of that thought process and decision-making went out the window in like 5 seconds.  It turns out that the seat we bought cannot be tethered in the rear-facing position in our car without an after-market installation of a bolt to the floor of the car (we later researched that the rear-tethering isn't required and our car seat would've been just as safe without it using just the LATCH or shoulder belt attachment).  The detective was being nice and was just trying to help us from having to get that done before our kid arrives by giving us a brand-new infant seat (they have a grant which allows them to buy infant seats for those who can't afford to buy them <--- more on that in a minute).  We were grateful.  He was very friendly.  But, had we had a bit more information, we would've stuck to our guns and used the seat we originally bought.

Here's the thing... when you become a parent (which I hope happens soon for us), you have to make decisions that work best for you and your child.  Of course you must follow the law about what is required and what is most safe for your kid, but beyond that, it is your call.  After much research and discussion we had gone with a specific car seat and, in the blink of an eye, we were persuaded to do something entirely different.  This different isn't bad or wrong, it just wasn't what we wanted for our lives or our kid.  But no big deal.  It will work.  And I can imagine this will be happening a lot with different choices and decisions we make as we venture into this world of being new parents.

I am sure we will love having this infant seat.  And I am sure its convenience will just blow me away (ha!).  At the end of the day, our kid will be safely buckled in her little seat, happy-as-a-clam, I am sure.

And, yes, that nice detective gave us that new infant seat for free but, we insisted on replacing it with a new one so that they can give it to another family in need of financial help.  That infant seat is en route from Amazon.com right now.  And we will deliver it to the police department with a huge smile and loads of thanks.  We really are appreciative of what we learned.
Posted by Unknown on Monday, March 05, 2012
Topics: enviro-geek, husband, life lessons, oh baby
Email ThisBlogThis!Share to TwitterShare to FacebookShare to Pinterest