I feel like I haven't posted many recipes lately.  That's because the stuff I've been making for dinner has been a little meh.  The usual stuff has made appearances... stir-fry with tofu, salads with sauteed chicken, breakfast-for-dinner omelets.... but nothing that has required a recipe.  Until last night.  I found eggplants at Whole Foods that were grown in Georgia and that's about as closely grown to Massachusetts as we're going to get at this time of year so Eggplant Parmesan it was! 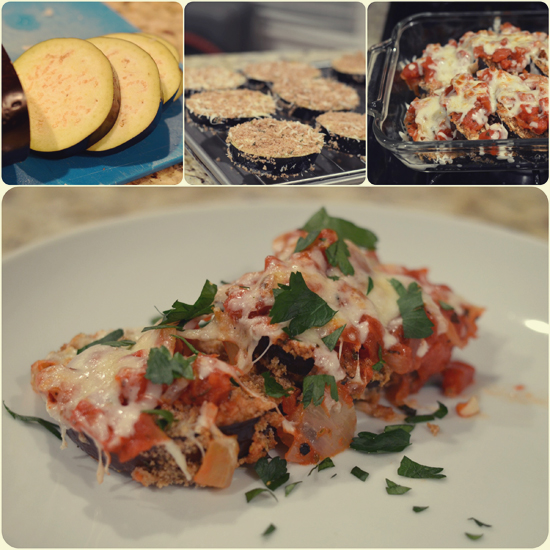 I used this recipe and found it to be pretty easy and pretty good and pretty healthy.  Here's the thing.  It tells you to cut the eggplant but to leave the skin on.  Once baked, the skin was still a little tough and the dish may have been better without it.  Also, you may be tempted to add more red pepper flakes as a half teaspoon just doesn't seem like enough.  Don't.  It really is enough.  I may or may not have doubled the red pepper flakes thinking it wasn't enough and it may or may not have been a teensy bit too spicy.  Just some words of advice.

Do you find eggplant difficult to cook?  I totally do.  I can't seem to get the right consistency between the gushy middle and the tough outer skin.  Mind-boggling.
Posted by Unknown on Saturday, December 17, 2011
Topics: locavore, recipes, vegetarian
Email ThisBlogThis!Share to TwitterShare to FacebookShare to Pinterest