Trashy T.V. can be thought-provoking. 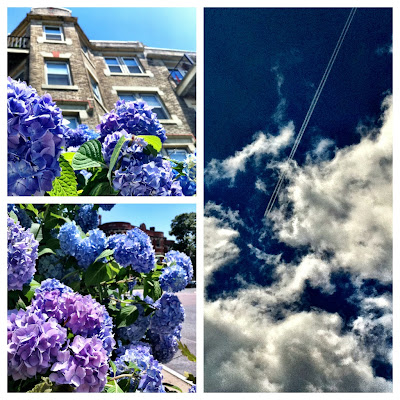 So I was watching 'Real Housewives of New Jersey' the other day (don't start!) and it was their 'Thanksgiving episode.'  One of those Jersey ladies headed to a turkey farm to get a fresh turkey for her Thanksgiving dinner.  When she got to the farm and saw all the birds, she refused to let the farmer pick out the bird that would then be killed for her to take home that day.  Instead she opted to take one that had been killed earlier in the day so that she didn't have to 'think about it being alive at one point' (her quote, not mine).  A few episodes later (yes, I watch this show regularly) the Jersey clan was at a cabin where they roasted both a full pig and a full lamb.  When the muscle-head Jersey husbands brought in the carcasses to carve up, a few of the Jersey wives freaked out at seeing the meat while it was still on the animal... and they refused to eat it.  Those ladies are going with the whole 'ignorance is bliss' approach to eating meat so as not to upset themselves when they dig into that juicy steak or tasty rack of lamb.  I get that.  But it got me thinking....


If you eat meat, do you think about where it came from or are you an 'ignorance is bliss' type of person?

I was a vegetarian for 8 years.  Honestly, I never thought I'd eat meat again.  I don't really know how I got back to the point of being a meat eater as I was once so passionate about not eating meat (passionate, not preachy).  When I did start eating meat again I made a point to buy organic, free-range and locally sourced meat so that I could be assured that the animal wasn't a product of factory farming and had lived a 'normal' animal life (think open fields and green grass and fresh air).  I still try to buy meat this way and I appreciate that what I am eating was once alive.  Not surprisingly, I'm not the only one who thinks like this.  Mark Zuckerberg (you might have heard of him... he created a little something called Facebook) recently took on the challenge of only eating meat that he had killed himself.

"This year, my personal challenge is around being thankful for the food I have to eat.  As part of that, the only meat I'm eating is from animals I've killed myself."

He writes that he was recently at a party where the hosts were roasting a pig.  Many of the guests said they loved eating pork but they didn't want to think about the fact that the pig used to be alive which Mark believed was 'irresponsible.'  And I agree.

Look.  I don't expect you to take on the mission of only eating meat that you kill.  I'm certainly not going to do that.  But just think about where that meat came from and the sacrifice that animal made so that you could enjoy a piece of meat.  I'm not getting preachy on you.  I just thought I'd share the thought-provoking moment I had while watching some in-debt housewives parade around New Jersey.  See?  Something good came of all those wasted T.V. hours!

Garmin stats: 5 miles/40min 45sec.  My longest run in weeks!  And then I did 40 'walking' lunges and 50 'crab-crawl' lunges.  I'm lovin' it.
Posted by Unknown on Tuesday, June 28, 2011
Topics: deep thoughts, enviro-geek, trashy t.v.
Email ThisBlogThis!Share to TwitterShare to FacebookShare to Pinterest