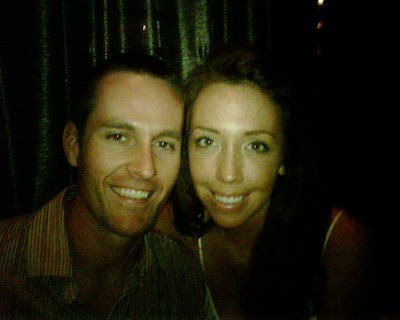 Night out in Venice at Nikki's Bar... 10 Gin & Tonics later, we were still smiling.

I was just looking through old photos in my phone and I came across this picture from my early days of dating Lee. So much has changed in our lives since we met and yet, I feel like I've known this man my entire life! Here is the story of how we met...

Living in L.A. can be a bit of a dating nightmare... actually, let's be honest... it IS a complete and total nightmare. You see, men (and women) in L.A. have a bit of a 'kid-in-a-candy-store' mentality.  There are so many flavors of women and they went to try them all!!  During nursing school I worked as a make-up artist at Saks 5th Avenue in Beverly Hills... not what I would call 'prime dating pool potential'... and being in nursing school with mostly women limited my options as well. Then there is the obvious dating pool - the doctors.  Uh no.  Have you heard of the expression that you don't sh*t where you eat?  Dating co-workers = Career disaster.  Have you seen the drama on Grey's?  In L.A. hospitals, those story lines aren't very far from the truth.

I'm adventurous.  Generally, I'm not afraid of going against the grain and trying new things.  On a whim one night, I signed up on Match.com to try my luck at online dating.  Oh boy.... online dating is A LOT of work.  I put up a profile with a few pictures and a vague description of myself and what I was looking for... and then the freaks came out of the woodwork.  Now, to be fair, a lot of really nice guys contacted me... but also a lot of dorks did, too.  The reason I say that online dating is a lot of work is that guys (sometimes 5 or 6 a day!) will send you an email... then it naturally progresses to a phone call or two... and soon enough, I'd forgotten which guy I was talking to on the phone!  I'd have 2 or 3 guys that I'd be corresponding with and I'd forget details about them or confuse them with each other... it was kind of a mess.  So, I started to take notes on the guys!  The thing about online dating is this.... a guy can look great on paper (and in photos) and you can have great phone chemistry... but then you meet for coffee or a drink and in an instant you know you're not compatible.  It's weird but you just know!  There were a few guys that I dated for a few weeks... one that I dated for almost two years!  So overall I'd had quite a bit of success with it.

After breaking off a two-year relationship (yes, we met on Match.com) and some time off from dating I decided to give online dating a go once again.  My sister and I went out in Santa Monica to a bar right down the street from our house to just relax after a long day of work/school.  We were catching up over beers... two single ladies out on a Friday night... and this guy starts talking to us.  He was sorta cute, kinda tall, not really very well-spoken (pet-peeve)... at one point he started telling us a story of how he'd crashed his motorcycle three different times and had cracked his head open twice so Hey if I forget your names it was because of his head injuries.  Really?  Um, no... not interested. The next guy that started to hit on me was about 5'5" on a good day and had hair down to his ass-crack... um, not my type.  That's when I called it a night, stopped by 7-11 on my walk home, grabbed a pint of Ben & Jerry's and logged on to Match.com.

During my time living in L.A. I would often come back to S.L.C for holidays or family gatherings and when I was here I would go out to the local bars/restaurants and I always seemed to meet nice, well-spoken, good-looking, like-minded, and normal guys.  In my slightly drunken and Ben & Jerry's induced sugar rush, I decided to be the pursuer rather than the pursue-ee, which had been my strategy with Match.com before.  I entered my mom's zip code and a 5-mile radius and up popped a multitude of cute, athletic, and (again) normal guys!  I took the initiative and sent a few of them emails.... just the basic 'hey-I-think-you're-cute-we-should-hang-out-next-time-I'm-town' type of thing (the beers were giving me courage!).  I heard back from almost all of them... but one of them stood out the most.

A very cute and very tall triathlete returned my email and thought I was cute, too, and it turned out that we had a lot in common so the emails continued.  Eventually this triathlete and I started to talk on the phone and I found out more about him and what I found, I liked. He was actually not a native Utahn but a Canadian who had gone to undergrad/grad school at the University of Florida and had gone there on a track and field scholarship. After a few years in Boston he eventually moved to Utah because he loves to mountain bike and snowboard and because "Outside" magazine rated our town as one of the hippest, most underrated cities in the U.S. (I couldn't agree more!).  He was also a self-proclaimed environmentalist and dug the fact that I drove a car that runs on a fuel made from vegetable oil.  We had a ton in common and the more we talked, the more we connected.

A sudden business trip brought him to L.A. and he asked if he could take me out for drinks and dinner.  Now I had been on many Match.com dates and never had I been nervous for any of them.... for this one?  I was a nervous wreck!  I fretted about what to wear, where to suggest we go to dinner, what to talk about... it was ridiculous how nervous this guy made me and I hadn't even met him in person yet!  He picked me up in his rental (a baby blue Mustang... I still give him grief to this day) and we headed to the Canal Club in Venice for dinner.

We met a friend and her boyfriend for dinner because I was so nervous that I needed 'wing-men' to get me through the initial awkwardness that first dates tend to have.  Dinner was great... the conversation was great... but I was convinced that he didn't like me.  We decided to meet up with a group of my friends at another bar and when he would leave for the bathroom or to get another drink I said to my friends, He's totally not into me....  As the night progressed, signs started to point to the contrary.  When he dropped me off... I had an inkling that I might be wrong.... and then he asked me to breakfast the next day and I realized that he did like me and that I liked him, too.

We ended up spending the entire weekend together and when it was time for him to fly back to S.L.C we were both sad to see it end.  As we were walking back to my apartment from breakfast he asked, Hey if I flew you to Salt Lake next weekend would you come out and see me? I was floored and ecstatic.  Of course I said yes!  We spent that week sending silly texts to each other and counting down the minutes until our next weekend together.

I will never forget the smile on his face as I rode down the escalator and saw him standing in the baggage area at the SLC airport waiting for me.

Two and a half years and thousands of SkyMiles later, this handsome guy who I sent a Match.com email to on a whim is about to be my husband.  Lee often says that the $30 Match.com membership was the best $30 he has ever spent.

I couldn't agree more.  Oh, and that 'sudden business trip to L.A.' was actually just an excuse to come out and meet me... I'm so glad he took that chance.

ONE WEEK TO GO!
Posted by Unknown on Saturday, September 26, 2009
Topics: deep thoughts, husband, my future, wedding
Email ThisBlogThis!Share to TwitterShare to FacebookShare to Pinterest