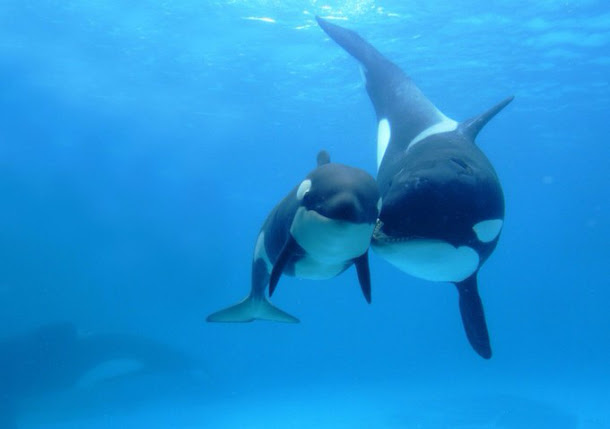 Oh boy. I watched a documentary last night that made me sick to my stomach and still has me reeling this morning. Blackfish premiered on CNN last night and, after watching it, I am disgusted at the story behind how Orcas came into captivity and became show animals.

I know zoos and aquariums and circuses are controversial and people are usually on one side or the other with how they feel about keeping wild animals in captivity for our observation and entertainment. I generally fall on the side of concern for the animals well-being over our ability to enjoy them through a pane of glass. But now that I have a child, the controversy of supporting these institutions is more relavant, especially as Alice gets older.

I'd like to think that the animals in zoos are content and I can only hope that most of them were born in captivity so the only reality they know is the enclosure they live in. I believe the difference between zoos and aquariums or circuses, though, is the entertainment factor. Those animals used in shows are trained and then rewarded or punished based on how they perform for an audience. And that is just terrible. I need to do a bit more research on our local zoo but for now, I feel somewhat okay still supporting it.

Blackfish didn't change my opinion of SeaWorld-type institutions as it was already pretty low before seeing the documentary but it did bolster my resolve to never take our family to one of their parks. Or the circus, for that matter, because really, that's all SeaWorld is... a circus show in water.

"I am not at all interested in having my daughter who is 3-and-a-half, grow up thinking that it's normalized to have these intelligent, highly evolved animals in concrete pools," said John Jett, a former SeaWorld trainer, who said he grew increasingly concerned about the stressful conditions the animals were living under at SeaWorld. "I don't want her to think that's how we treat the kin that we find ourselves around on this planet. I think it's atrocious."

What do you think about this? Have you seen Blackfish? If you haven't, you should.