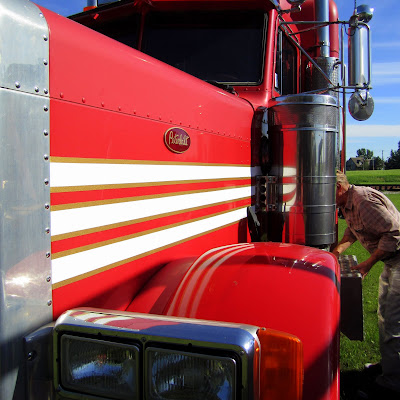 So you guys might think I'm weird but... I love heavy machinery, farm equipment, and BIG trucks.  I just find them so fascinating!  I married into the perfect family because my father-in-law has a ton of this kind of stuff on their acreage.... including a 1989 Peterbilt semi-truck.  Here's a little back story:  My father-in-law entered a drawing to win a 1989 Peterbilt for the 50th anniversary of the company.  Out of more than 300,000 entries... HE WON!!  Peterbilt flew my parents-in-law to Tulsa, OK where they were given the keys to this brand new cherry red beauty.  Luckily my father-in-law was a trucker at the time so it wasn't like, "Great. Now what do we do with this thing?"  Have you seen the show 'Ice Road Truckers'?  Yep.  That's the kind of trucking my father-in-law used to do.  Pretty bad ass.

So I've always admired the Pete.  The first summer I visited Lee's parents, I remember sitting in it, marveling at all the knobs and buttons.  But I'd never ridden in it (it doesn't move much these days).  This year, though, Lee asked if my father-in-law could take me out for a spin (Lee knows how interesting I find this stuff).  So yesterday afternoon, I heard a ruckus in the yard and it was the Pete roaring to life!  I climbed into the cab and off we went!  Wow.  It was so cool being in that thing.  You feel so high and mighty!  We drove to the next town, grabbed a Timmy Ho's Iced Capp (the Canadian equivalent of Dunkin Donuts), and cruised down the back roads.  And this is what happened next:

father-in-law: "Okay.  You're driving.  I'll stand up, you slide into my seat and take the wheel."

father-in-law: (standing up, ready for me to take the wheel): "Yep!"

So I drove the Pete.  It was awesome.  And powerful!!  I drove it for a mile or two and then we came up on a 4-way stop, and since I have no idea how to shift, my father-in-law coached me how to slow her down and pull over to the side.  Oh man.  I could totally be a trucker! 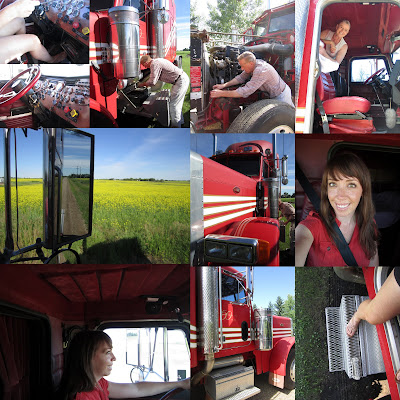 Do you have things that you are totally interested in that people are like, 'Huh?'?  For some reason, I have always found BIG machinery so fascinating.  Excavators, dump trucks, semi-trucks... anything like that and I'm hooked!  Oh, and I am totally into trashy T.V.  But you already knew that.