I need some sunlight and Vitamin D!

Blah.  Blah.  Blah.  Blah.  That's how I felt today.  I don't even know what my problem was but I felt edgy the second I woke up this morning.  Maybe I have 'seasonal affective disorder' but instead of feeling depressed, I just feel bitchy.  Who knows, but I sort of snapped out of it after Lee and I did a run.  It was 9 degrees outside but, by golly, we were going to get a run in.  And it felt great, too. 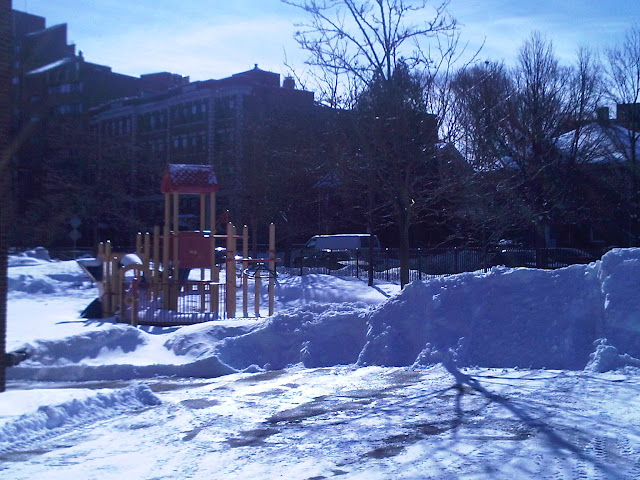 (The poor children can't even get to their play equipment!)
Later, we ventured to Whole Foods which, by the way, YOU SHOULD NEVER DO ON A SATURDAY.  Geez.  There was a whole mess of people in there.  Not enjoyable in the slightest.  When we finished up we both looked at each other and said, 'WE WILL NEVER GO TO WHOLE FOODS ON A SATURDAY EVER AGAIN!'  It was that bad.

Real Simple has a list in the February issue about 'the 30 Healthiest Foods' and I was happy to see that many of them make regular appearances in our diet.  Some of my favorites...

1.  Skim Milk - well, we drink 1% but it is a GREAT source of nine essential nutrients, including Vitamin D.  I can't have a PB & J without a biiiiig glass of milk.  So good.

2.  Mushrooms - Love them.  And they have been shown to protect against breast cancer by helping regulate estrogen levels.  That's always good!

3.  Natural Peanut & Almond Butters - We eat A LOT of peanut butter.  They have heart-healthy fats and are rich in protein.  I love adding a spoonful to my morning oatmeal.

4.  Quinoa -  We don't usually eat this but I bought some today because it is the bomb-diggity and I usually forget about it.  It is a complete plant protein, containing all nine essential amino acids.  When I make it, I'll post the recipe since it isn't a common ingredient.

6.  Nonfat Greek yogurt - This stuff is like crack.  It can be used in place of sour cream on baked potatoes or add some honey and granola and it totally passes for dessert.  It also has tons of protein.  Even my husband likes it!  Score!

7.  Spinach - I much prefer a spinach salad to any other bed of greens.  Spinach is a great source of iron and folate and has at least a dozen flavonoids... I have no idea what flavonoids do but they sound important!

Unfortunately it is only supposed to get colder over the next few days.  When it is that cold outside, I don't feel very motivated to leave the house to do anything.  I'd much prefer to curl up on the couch with my main squeeze and read a magazine or watch a movie.  Is that bad?!?

Garmin stats: 5 miles/40 minutes + 5 hill repeats on 'Heartbreak Hill.'  The only thing heartbreaking about that run was the goddamn cold.
Posted by Unknown on Saturday, January 22, 2011
Topics: Garmin love, random factoids, weather
Email ThisBlogThis!Share to TwitterShare to FacebookShare to Pinterest