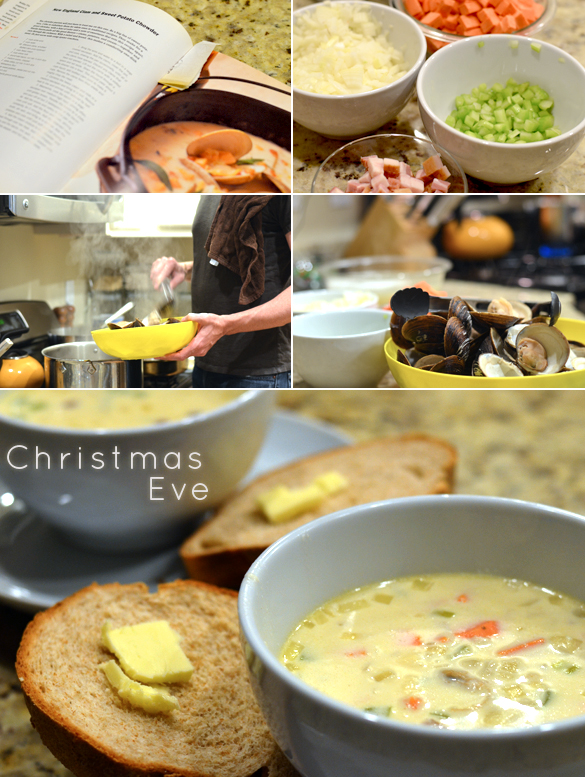 It's a good thing I'm not really a calorie-counter because I am pretty sure we ate a week's worth in just a few days.  There was made-from-scratch clam chowder, a cheese plate, wine, beer, slices of egg nog coffee cake and, of course, egg nog spiked with amaretto.  And that was just the food on Christmas Eve!  Christmas day started with egg nog lattes and mimosas and then a late lunch with what will become our annual Christmas tradition... some sort of dish served with hollandaise sauce.  Last year, it was traditional eggs benedict.  This year, to mix it up but continue on with the tradition, we had sweet potato-chicken hash with green chile hollandaise.  It was rich and creamy and delicious.  There was also talk of making homemade pasta for a dish to be had with Christmas dinner but, after that late lunch and all the snacking done in between, we decided to shelve that idea for another day.  And then there was a bourbon pecan pie for dessert from my favorite place, Treats on Washington.  So good. 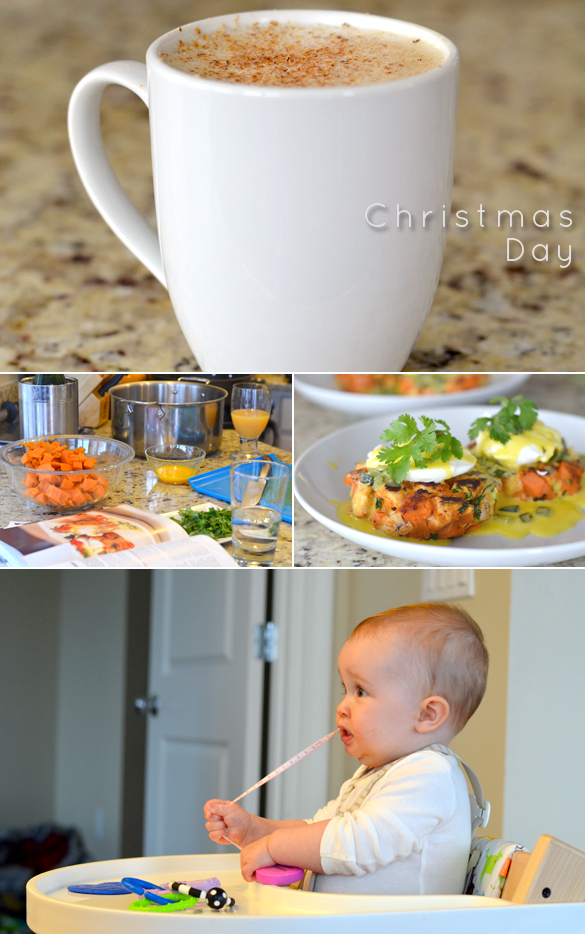 As a younger woman, say... in my 20's... I was much more concerned (obsessed?!) with the number of calories I ate and how many calories I burned.  Running an insane number of miles.  Eating diet-like foods.  Drinking sugar-free diet sodas.  Standing in front of the mirror and squeezing and pinching and sucking in various parts of my body (living in LA certainly didn't help).  I think my exercise-and-food focused self managed to stay in the healthy realm of living as I never starved, binged, or purged.  But, man, was it exhausting thinking about all that stuff!  And then, around the time I turned 30, those thoughts and all that obsessing about food and exercise just became less important.  That constant conversation in my brain quieted.  I started to feel more confident and comfortable in my own skin.  I stopped focusing on calories in food or miles run in a week.  Moderation in all things became my mantra.  Eating when I was hungry.  Stopping when I was full.  Working out most days of the week.  Listening to my body if it asked for a rest day.  And then not beating myself up over taking that rest day!  Putting away the scale because, really... it's only a number.  Being nicer to myself, both inside and out.

A few years ago I remember asking my Dad what he felt was the best time of his life.  He stopped, thought about it for a quick second and said, "Right now.  Because I'm alive and healthy."

Was there a milestone age you were afraid of turning?  30 was so daunting to me for some reason!  And then it came and went and it wasn't a big deal at all.  Now 40 or 50?!  Hmmmm.... I'm glad I have a few years before those big milestones!
Posted by Unknown on Thursday, December 27, 2012
Topics: deep thoughts, foodie, holidays
Email ThisBlogThis!Share to TwitterShare to FacebookShare to Pinterest